Add My Business Add My Event

Are you a Philadelphia guru? Be heard and share your experiences by becoming an 215area.com Contributor. Learn More!

Are you a local in the Philadelphia area? Join your community and Get Connected with others in your area. Join FREE!

Beer Here! The Best Places To Get a Beer in Philadelphia 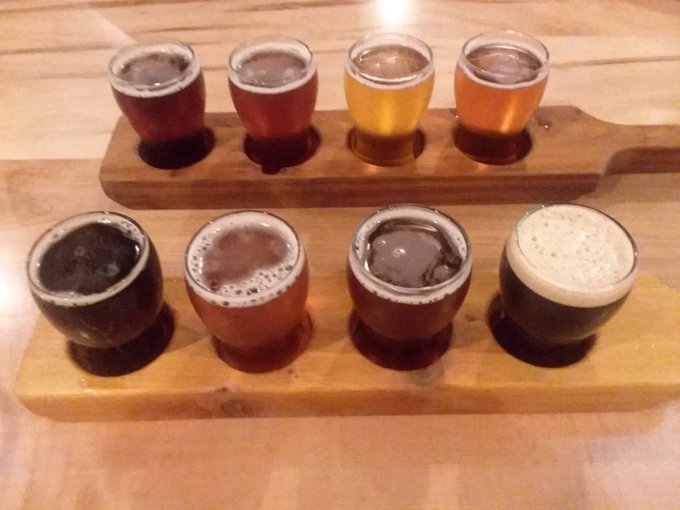 As it turns out many of America's founding fathers were fans of beer, including Philly transplant Benjamin Franklin himself, so it should be no surprise that Philadelphia is one of the best cities anywhere for beer. And though the echoes of history will always surround you no matter where you walk in the city, there are also plenty of places on the cutting edge of the craft brew revolution, with styles and profiles that run as wide as Broad Street and as deep as the Delaware River.

But where should one head to consume these chilled crafts of character? Here are our favorite places to grab a beer in Philadelphia!

The Fishtown favorite might be the best spot to be when the weather is good for a brew anywhere in the Delaware Valley. With its massive outside space, authentic German food with large picnic tables, and games ranging from ping-pong to Jenga for the oversized child in you, it's a terrific spot for both groups and dates.

And did we mention the beer? If you're looking to find anything that ends in "weizen" or imported from a Fraulein, we've found your spot. There's plenty of local brews too, but ask for a Bud Light and be prepared to be laughed out of the joint.

Also, don't miss Fette Sau Philadelphia next door for restauranteur Stephen Starr's legendary BBQ that will transport you to the smokers of the South instantly. 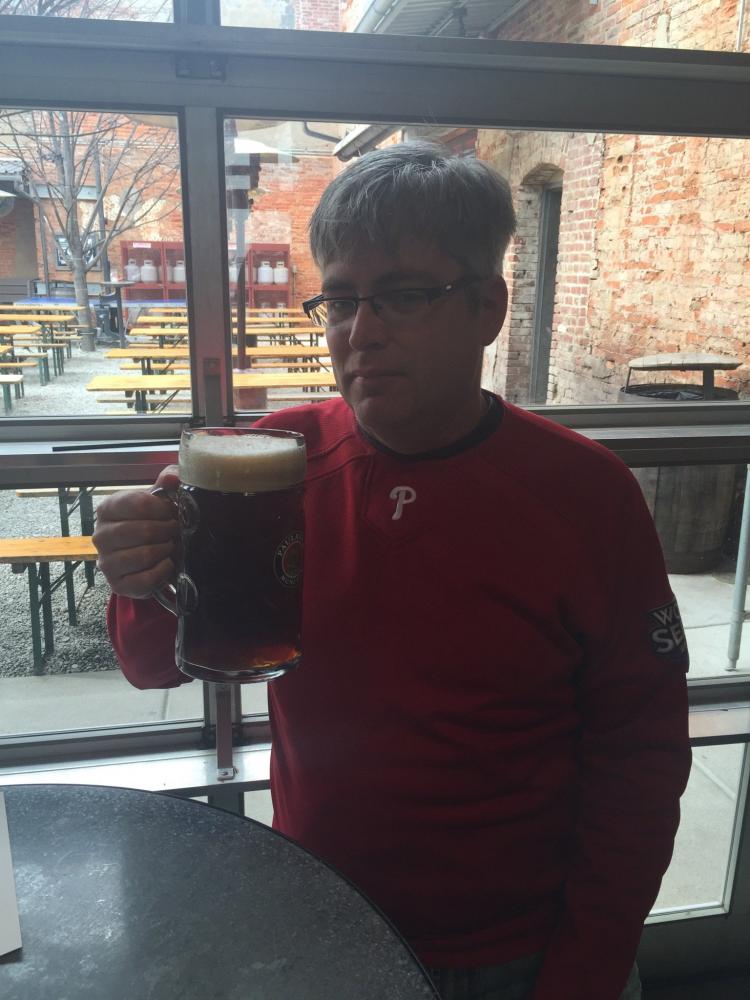 A terrible pic of me and my beer at Frankford Hall, likely toasting the 2008 World Series Champions.

It's so Belgian it should be divided in thirds.

It's on all the compilations of "places you have to get a beer" in America for a reason: because the beer list can be measured by the score. With more than 25 on tap and 200 different bottles, even beer dislikers will find something via their "Beer Bible" that will agree with the palate. The menu is pretty terrific itself, and while mussels are popular, but take the duck confit for a spin even if you're sharing with a group.

No reservations, no groups calling ahead, so prepare to wait a bit especially on weekends. But it's worth the wait for sure. Come ready to explore. 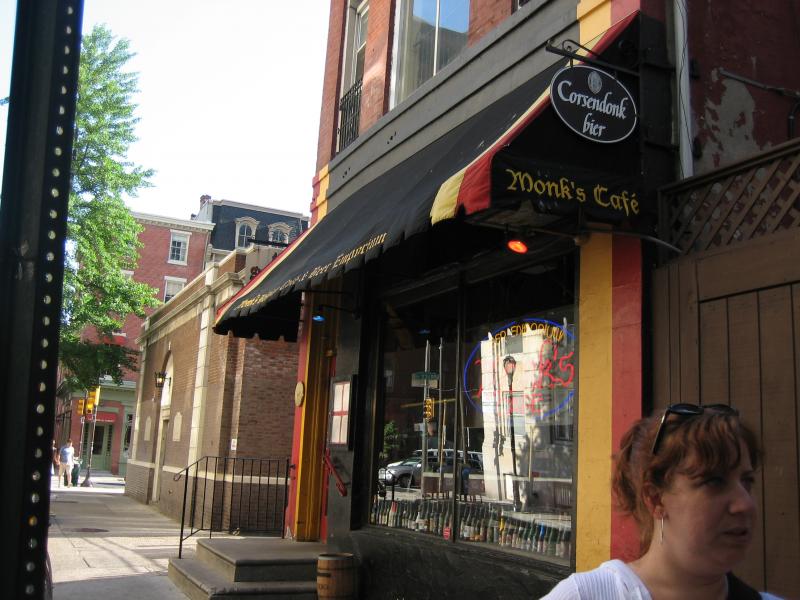 Monk's is a must-stop on any Philly beer tour.

If you love local, there might not be a better spot. Standard only taps beers from the Commonwealth of Pennsylvania, meaning you'll get everything from Conshohocken to Collingdale and beyond.

The menu is upscale and changes often, but fresh seafood and even some wild game will be found. The food is as local as the beer, meaning it's the spot to see everything that Philly is doing right now in both brewing and fooding.

Don't forget the Happy Hour: 4-6pm during the week with half-price selected brews and discounted appetizers.

Full disclosure: get the Good Dog Burger. Stuffed with Roquefort cheese in the patty, it's phenomenal. But that's another article, we're here for the beer.

The Dog is dark, a bit cramped, and dive-inely wonderful. You can get a Unibrowe La Fin du Monde from Canada or a Love City Lager, but what makes it special is the food and fraternization the space creates. Their hand-cut fries remain undefeated, and we dare you to find a beer that won't pair with them perfectly. And since they're open until 2 a.m. seven days a week, we suggest the Nick Foles-free Philly Special when it gets close to closing time: a 16oz Yards Brewing Brawler with a Keystone Whiskey shot for a mere $6, one for each point scored on the biggest play in Eagles history. 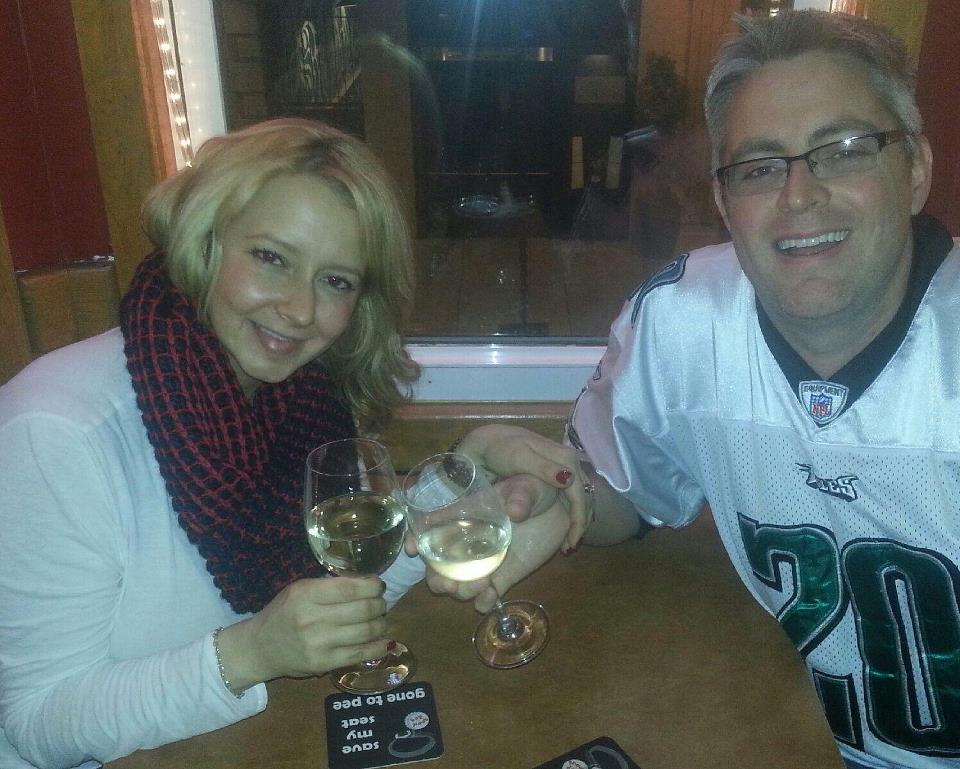 My friend Kristen and I pre-beering at Good Dog. Go Birds.

There might be better breweries, and there are possibly bigger breweries, but no place inside city limits is better for big groups or watching a game than Yards.

They do make delicious beer, and Yards is as synonymous with the Philly brewing scene nationally as Cigar City is with Tampa or Anchor is with San Francisco. And because of the size of their massive space on 5th and Spring Garden, the whole gang can hang out and sip sampling flights while taking their time to relax. The service is usually top-notch as well, which makes things much easier when everyone needs a place to coalesce and eat some chili (made with prime sirloin).

Title picture of flights from Yards Brewing Company. All photos from the author, except Monk's Cafe pic from Wikimedia Commons.

For more beer joints in Philly, connect with 215area, we're your free guide to fun things to do in Philadelphia!